NOMINATIONS ARE OPEN!  Deadline to submit nominations is April 15, 2022.

ALL AWARD RECIPIENTS WILL BE NOTIFIED AND POSTED ON OUR HOME PAGE.
Coach of the Year Award – Each year Ringette Alberta will award one Coach of the Year award.  The coach’s home association will also receive $250 to be used to aid in the further development of their coaches.

Official of the Year Award – Ringette Alberta will award one senior and one junior Official of the Year award each season. The selected officials will have demonstrated strong performance and commitment to the sport of ringette through active participation and involvement. Criteria for this award include level of contribution; longevity of service; impact on the sport; demonstration of excellence; attitude and peer feedback.

Ringette Excellence Award – This award is intended to recognize an individual or group who has/have made a significant contribution towards showcasing the popularity and the overall appeal of the sport of ringette. This award is provincial in scope and stature and recognizes outstanding, lifelong achievement as a volunteer supporting and improving the sport of ringette.

Friends of Ringette Award – These awards are intended to recognize outstanding individuals who have shown dedication to the sport of Ringette. This award is meant as an opportunity to celebrate the unique nature of the ringette community, both geographically and demographically.

Phyllis Sadoway Development Award – This award is given to a maximum of two associations each season that demonstrate an outstanding commitment to developing and growing the sport in their community. The Phyllis Sadoway Development Award accompanies a cheque for $500 given to each selected association to use to further enhance their programs. These funds may be used to offer development opportunities for officials, team staff, players, volunteers, and parents within the association.

Ringette Alberta Board Service Award– This award is intended to recognize long-serving board, committee, or sub-committee members who have provided Ringette Alberta with outstanding volunteer service. 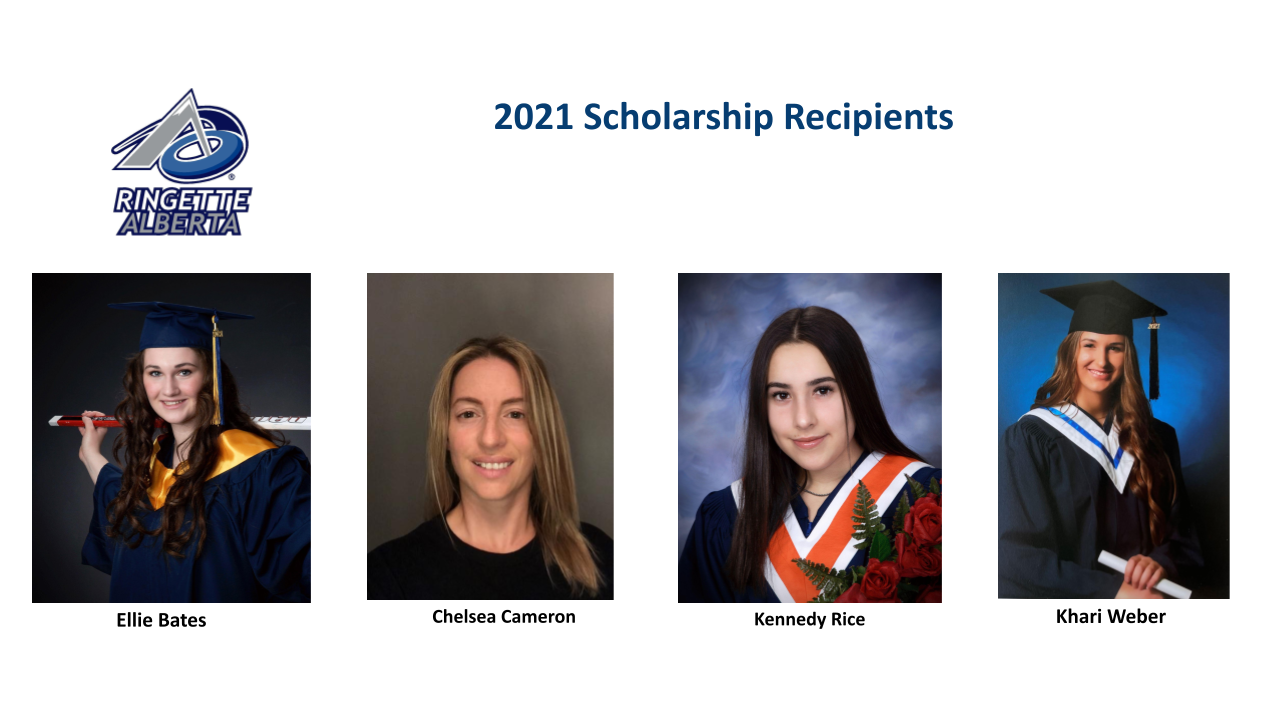 Ringette Alberta scholarships are given out each year to ringette players who have demonstrated both strong academic performance and a commitment to the sport of ringette through active participation and involvement. These scholarships are designed to encourage athletes to maintain their involvement in ringette while pursuing post-secondary studies. Up to four scholarships of $1500 each may be awarded each year.

Once your online application has been submitted, official transcripts must be to Ringette Alberta and received by August 5th at:

The Agnes Jacks Scholarship Awards are named in honour of Mrs. Agnes Jacks who, following the untimely passing of her husband Mr. Sam Jacks (ringette’s founder), picked up the gauntlet and became a dedicated and tireless promoter of the sport. Mrs. Jacks became a well-known and well-loved figure in the ringette community and over the years became known across Canada as ringette’s “goodwill ambassador”.
This program provides a number of scholarships of $1,000 each towards post-secondary education for ringette players, coaches, and officials who demonstrate a strong commitment to the sport of ringette. The number of scholarships offered each year is determined by Ringette Canada’s Board of Directors.

Applications must be received in the Ringette Canada office no later than March 31st.

The Cara Brown Scholarship, which recognizes and rewards combined performance in elite ringette and scholastics, is awarded to registered ringette players who are actively playing ringette at the elite level (AA or at the highest level offered in the applicant’s community), who are entering a Canadian university on a full-time basis for the first time, and who combine academic excellence with a strong commitment to the sport of ringette. Starting in the 2010-2011 academic year, Cara has generously increased this scholarship to $1,000. Two annual scholarships are provided and successful applicants also receive a certificate recognizing their achievements.

Ringette Canada is grateful to Cara and her company, Brown Economic Consulting, for their generous support of this program.

Applications must be received in the Ringette Canada office no later than March 31st.

The 5-Count Ringette Goalie Scholarship provides two scholarships in the amount of $250 each and are awarded annually to registered players who are actively playing as a goalkeeper and the scholarships are to be used for a unique opportunity that will benefit them as a goalie, their team, and/or ringette in general. The scholarships have been made possible through the support of Keely Brown, Heather Konkin, and the program they co-own, 5-Count Ringette Goalie Instruction.

Intro to Ringette programs are targeted primarily at youth and adult participants (but can be made available for older children) who possess basic skating skills but did not begin ringette as early as their peers.

These programs quickly introduce participants to ringette basics so they are confident joining a ringette team after completion.

Program components include rules orientation, basic strategies of the game, and time to practice the basics of ring control.

Each association will develop its own program with different frequency and lenth of program, e.g., once per week for eight weeks.

Generally, Learn to Skate programs lead into Intro to Ringette programs and these lead into Flex or Classic ringette. To see how these and all the other programs relate to one another, check out the Find Your Ringette page